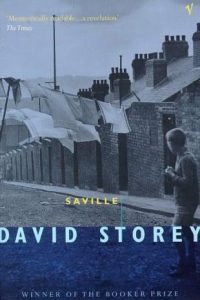 David Storey, who died this week aged 83, is best known for his first novel, This Sporting Life (1960), a tale of rugby league and teeth-smashing pitch violence. The film adaptation, featuring Richard Harris, has ensured that Storey, who wrote the screenplay, won’t disappear from the British imagination.

Saville, his novel that won the Booker prize in 1976, ought to be better known too. They gave it a rave review: “Mesmerically readable, Saville is a revelation.” Literary merit aside, it also captures two important strands of postwar Britain’s story that have long disappeared: the lost world of coalfield life, and the consequences of social mobility (remember that?) as grammar-school educated boys and girls escaped factory drudgery.

Saville is one of the last hurrahs of a once common thing — a novel about English working-class life by a working-class novelist. The Storeys and Sillitoes, Braines and Barstows have been abolished.

Saville is semi-autobiographical: Colin Saville and Storey are miner’s sons; both pass the 11-plus. In the novel, Saville wins a scholarship, begins to lose his south Yorkshire accent, and becomes a teacher. He has left behind the pit village, but where does he belong? How does this rough man (he hates posh rugby union) fit into a soft-handed world? What has he lost now that he is middle class?

This novel was last reissued by Vintage nearly 20 years ago. Time for a spiffy update.
Saville by David Storey, Vintage, 560pp, £9.99